Classic cars are like moving art pieces — beautiful to look at and built to last, but not very practical when it comes to function, especially with today’s gas prices. Modern cars are designed for efficiency and aerodynamics, run via a sophisticated computer system, and go through comprehensive safety and environmental tests. Classic cars, on the other hand, were made to make a statement.

Purists define American “classic cars” as cars made between 1915-1948, although some vintage car sellers define “classic” as any car that’s at least 25 years old. More generally, classic cars refer to elegant or unusual-looking cars manufactured during the mid-century (40s-60s), including the muscle cars of the late 60s and 70s…basically any vintage car considered collectible today. Muscle cars or “hot rods” refer to two-door cars; small cars with big engines for the purpose of going really fast. They’re a bit different from sports cars, built specifically for racing.

If you’ve never taken a spin in a classic car, a slick vintage Buick, Chevrolet, Chrysler, or Ford, it’s a lot like getting in one of those private planes from the 80s: bumpy, loud, and mildly terrifying. Although classic cars were designed to last a lifetime—with literal tons of steel built upon a sturdy metal X-frame — and can still easily crumple any Asian-produced sedan, that’s part of the terror: the sheer force behind the wheel. 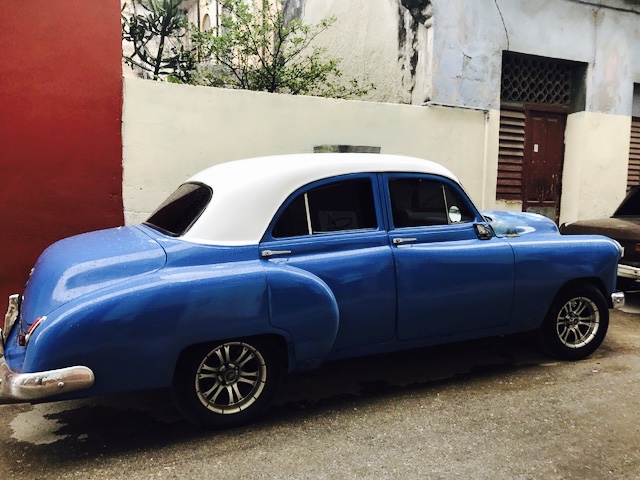 The golden era of classic cars wasn’t as concerned with safety as it was with innovation. After all, the 50s were the Age of Discovery— not the Age of Litigation. Regulatory measures such as crash dummies, crumple zones, emissions tests, and even seat belts or airbags weren’t required yet. (This was also before they discovered the sun caused melanoma, cigarettes were linked to lung cancer, and “family-friendly” toys like Jarts could turn a Sunday barbecue into a bloodbath). While American-made classic cars definitely weren’t “safe” in today’s sense of the word, the sleek designs still make them highly sought-after, both as restoration passion projects and for afternoon cruises.

One obvious reason classic cars are more aesthetically interesting and have lasted longer than, say, a Ford Taurus, is because they were designed by actual craftspeople and not spit out by a factory, like today’s modern cars. Whenever anything gets produced to scale, a bit of the charm gets lost in the manufacturing. This is as true of antique engagement rings as it is of classic cars. Quality craftsmanship affects durability, too. Products created by hand usually last longer than machine-made, as well as embody more style and character.

The whimsical, organic shapes found in American classic cars are reflections of the popular midcentury modern designs of the era. Fun details like shark fins, starbursts, flying saucers and other shapes inspired by the Atomic Age not only showed up on fashion runways and furniture during the 50s and 60s, but also on freeways and fast-food drive-throughs, on the silhouettes of classic cars. 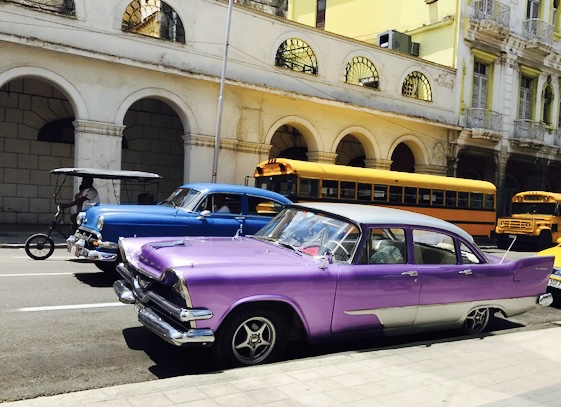 Where to Find Classic Cars

These days the best places to see old American classic cars are at hot rod or classic car shows. Classic cars and muscle cars especially are popular with the rockabilly/pinup crowd, and anyone who’s anyone in the scene will know where the underground drag races still take place. Classic cars can still be found in the marketplace, too,  as well as at online auctions and estate sales. As Baby Boomers downsize and let go of their Pyrex collections, china, and other collectibles, their classic cars will also need new places to park.

Another unexpected place to find American classic cars still in use is in Havana, Cuba. Stepping onto the streets of Havana is a lot like stepping back into time, to the 50s before the U.S. embargo on Cuba began (if you can get past the people at Parque Central huddled over their iPhones). Visiting Cuba is an interesting look at what life must have looked like during the midcentury, with the iconic architecture from history books, and familiar scenes from Hemingway’s haunts,  in a contemporary Instagram-worthy color palette. And of course all the American classic cars are strategically parked outside the best hotels and in La Plaza de la Revolución, the tourists hanging out of their passenger seats, snapping selfies with Che and Jose Martin.

The classic cars in Cuba, however, aren’t purely American — or even purely classic. As any Cuban taxi driver will boast (and they all moonlight as mechanics because 70-year-old cars are prone to breaking down on a dime): You might be riding in the backseat of what looks like a 1957 Ford Fairlane convertible — but it’s got a Lada engine or a Toyota transmission. Manual cars become automatics, as engines are replaced with more efficient ones. Because of the smorgasbord of automobile parts, Cuba has been called the “Galapagos Island” of the classic car world. 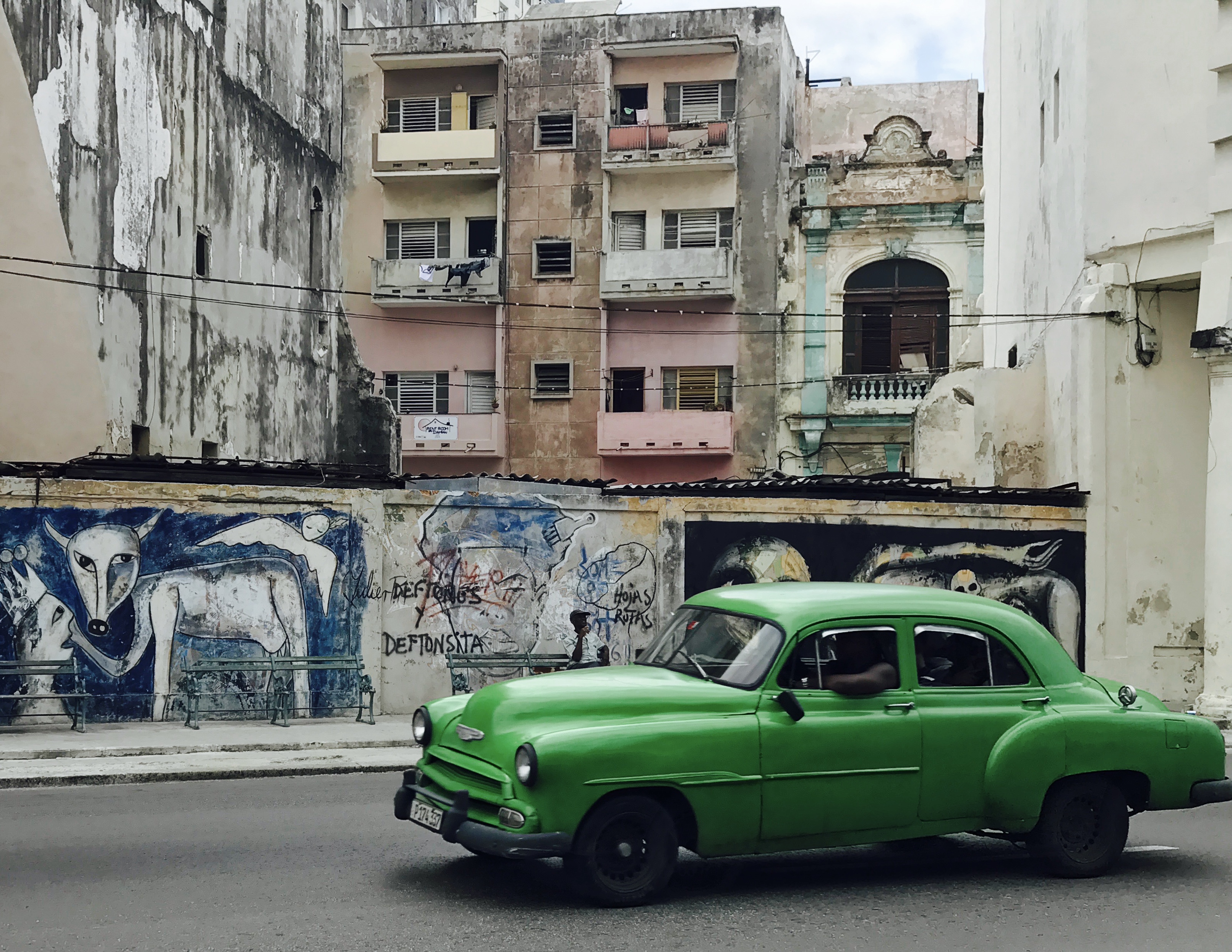 The Galapagos metaphor is true in a lot of ways. Not only have the American classic cars in Cuba morphed into something entirely new and uniquely their own, the cars have evolved according to their habitat and limited resources available. It’s not unusual to see vintage cars held together with rope or masking tape, or to find broken down cars hiked up on jacks, the bitter smell of cheap oil thick in the air. The classic cars you see in 2017 are both relics of the past and examples of natural selection — a reminder that creativity is often borne from necessity and struggle.

Vintage cars are driven all over Cuba because that’s what the people have, and they don’t have much, or the means to get more. Thus, some of the more industrious have learned how to capitalize on their classic cars’ allure, making money off them while they still can from tourists who visit from all over the world for a glimpse of the past. You’ll find classic cars spruced up and used as taxis throughout the city, as well as used for popular Classic Car tours, or lined up for ready-made photo-ops outside the popular Hotels Nacional or Inglaterra. 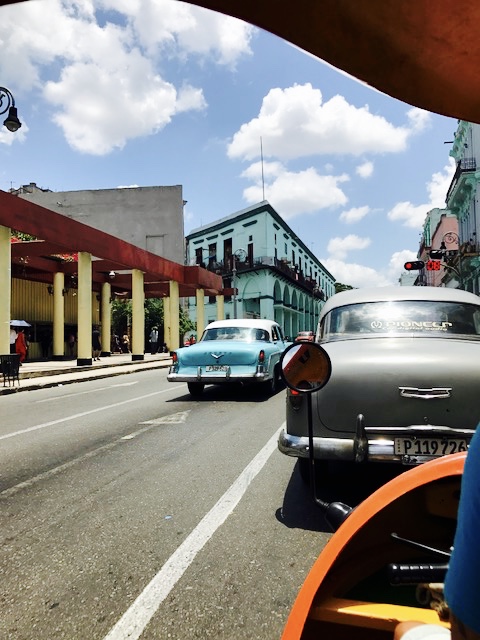 Other unique features found on classic cars are the roomy seats: bucket seats and bench seats (which parents worried their Baby Boomer teens would use for “necking” —and they did). wing windows or vent windows (which led to the phrase “crack open a window”), cool Space-Age-style hood ornaments (because, why not?), and lots and lots of chrome. 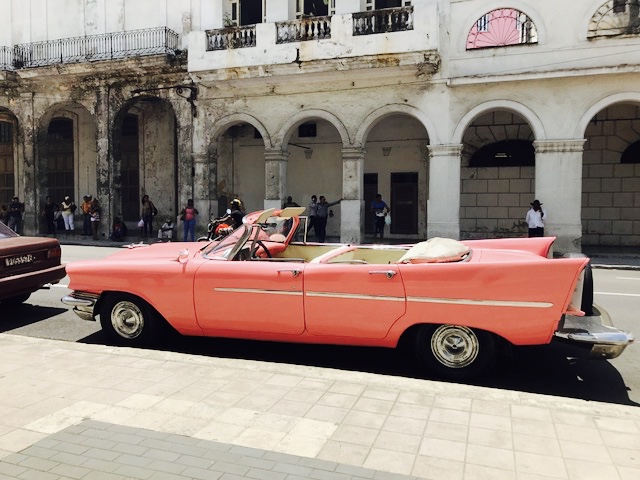 These days, people interested in buying a classic car should consider buying one from an estate sale. This is a smart idea especially if the seller actually owned the car for years and can tell you firsthand about the car’s quirks. You’re also more likely to find better deals on classic cars at estate sales than from dealerships or collectors.

Buying a classic car from estate sales requires a bit of research, however, so know what to look for and which questions to ask. Read up on interesting models and scour the Internet to see what American classic cars go for in your area. Prices will vary due to mileage, condition, year, and selling region. Before hitting the estate sales, search for “classic cars” on our homepage. That will pull up all the sales selling classic cars. 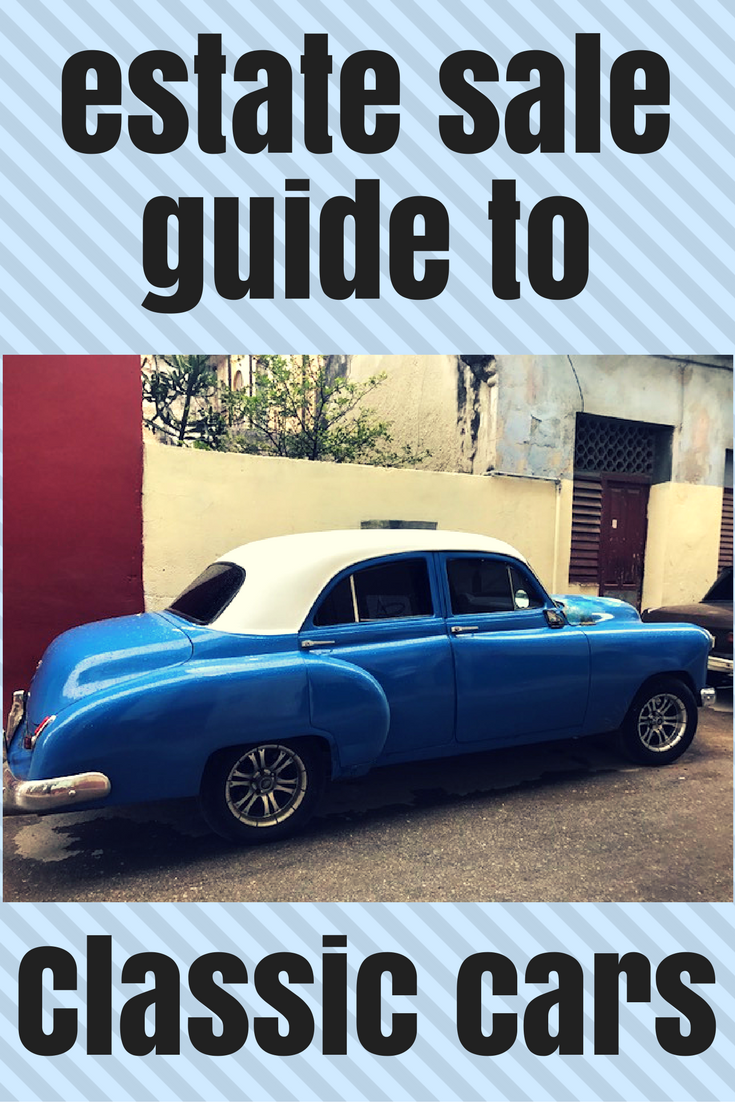 Have you ever bought a classic car at an estate sale? Where do you like seeing classic cars? Let us know in the comments!