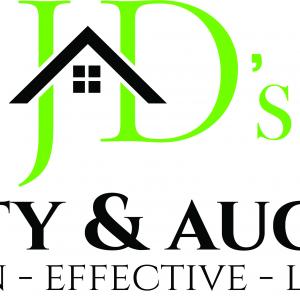 My Family and I are extremely happy to be back in beautiful East Tennessee. After serving 20 years and six combat deployments to Iraq and Afghanistan in the Army as an Infantry Officer we have decided to follow our passion to open JD's Auctions., LLC in beautiful Clinton, TN.

Jason most recently served as the 4th Brigade 3rd Infantry Division Deputy Commander, and Natalie Served 8 years in the Army and left as a Captain. Both Jason and Natalie worked with Savannah Auction exchange out of Pooler, GA as a relief Auctioneer an online auction specialists. Jason is from Haysi, VA a small town nestled in the Appalachian Mountains.

Jason began his military service on 03 October 1994 with the Virginia Army National Guard. I graduated from one-station unit training (OSUT) in September 1995, as a Combat Engineer. He enrolled at East Tennessee State University and their ROTC program and earned a Scholarship, while there he majored in Criminal Justice and was commission a 2LT in the Infantry on 05 May 2000. Jason held numerous leadership positions ranging from Platoon Leader through Deputy Brigade Commander. Later Jason attended Webster University earning his Masters of Business Administration M.B.A graduation with honors and a 4.0 GPA.

In the summer of 2014 he attended the North Georgia school of Auctioneering and earned his Auctioneer licensed after passing the state exam for Georgia then later his Tennessee Auctioneers license. He is a member of the National Auctioneers Association.

The Ray Estate of Loudon, TN

This estate is full of the most eclectic collections in a long time and has over 700 lots! The Ray Estate is a collection of over 60 years of collecting! If you are a toy collector we have vintage Tonka, Little Tikes, Fisher Price, Power Rangers, Pet...

Wood working tools and so much more, great selection of all kinds of tools. Auction is on the 26th of July at 2PM.

This North Knoxville Auction is a downsizing opportunity for the family. There are various items ranging from decorations, lawn equipment (including a riding mower), kitchen items, art and more. In addition, something this auction has that we have n...

Online Only begins to close on Friday July 3rd at 7:00pm Check back as all items will be uploaded in the next 24 hours. PICK UP IS SUNDAY (July 5th) AND MONDAY (July 6th) ONLY. All items must be removed from the property no later than Monday as t...

Fitzgerald Auction is a great Collection of Aircraft Memobrila, Toby Mugs and more.... THE PICKUP WILL BE ON TUESDAY AND THURSDAY AFTER THE AUCTION THE 30 OF JUNE AND THE 2ND OF JULY.

This auction begins to soft close on Friday, June 26, 2020 at 7 p.m. Folks! This is a very unique auction for JD's! We are selling the entire contents of a North Knoxville Salon that is no longer in operation. This converted home has been a salon ...

Auction is open and bidding is going on, great items in this one. Check us out and get tot bidding.

Mrs. Willard is a Knoxville, TN native! Athoughth she had moved to N.C. for eight years, where she owned her own Casino Gaming Business, she returned back home where she has lived with her husband of 32 years. Mrs. Willard is a big College sports fan...

Great items in this Auction, come see what we have. We will have a live preview on the 15th, come see in person.

The Dobson Collection is small in size, but large in quality! This home boasts of beautiful furniture including Cherry, Mahogany, Oak and Walnut pieces that are in excellent condition. Included in the items are full bedroom suites, dining and livin...

https://jdsauctions.com/general/the-webber-collection-of-clinton-tn/ clip on the link to start bidding, this auction has some great item Beautiful Hall Tree, Knife display piece, painting, knives and so much more. Auction ending on April 19th at 2 P....

With over 600 lots, this home offers everything for the household. The owner/proprietor of The Quilted Frog had made clothing, pillows,handmade quilts, quilt tops, pieces, as well as a large amount of fabric/material, quilting frame, Singer Sewing m...

Bidding is now open, there are alot of items all through this estate. Many Large lots, bring your trucks and trailers.

All items have been added to this beautiful Westmoreland Estate so take your time to look through this wide variety of unique items. Make sure you look all the way to the very end so that you don't miss treasures like the Mint and Rare Rosenthal "Cr...

This beautiful home, built in the 1930's, has some great treasures, including the original kitchen cabinets, a pipe organ from the 1800's and a gorgeous farm table, all for sale. Get your bids in for this great sale. The soft close starts Sunday, A...

Multi Estate Coin auction, do not miss this Online Only event.

The L Estate in Lyons Head of Knoxville, TN

Do not miss this online only coin & jewelry auction event

Dutch Valley Antiques has decided to transiton from the antique business and now wishes to liquidate their inventory. Multiple auctions will be conducted in order to clean out this expansive building so keep checking back. Quality antique furniture...

This is Part II of the Heath Estate of Clinton, TN. Lots of treasures abound in this auction. Years of traveling and purchasing for their antique store and for themselves gives you an opportunity to purchase some awesome pieces!

Mr. Walker has a ton of commercial grade electrical components at his estate. This is a liquidation of Commercial electrical Overstock, please read each item desciption, some items are new, some are used, NONE have been tested There are a total 630 l...

Alcoa, TN- Join us online on Sunday, February 9, 2020, at 2:00 p.m. as we host Part II of the public online auction of Mr. and Mrs. Witt of Alcoa, TN. Mr. and Mrs. Witt have enjoyed attending estate sales and auctions across Tennessee and other stat...

We ask you to join us for our weekly Sunday afternoon online auction! This week we present the Vintage & Modern Estate Toy Auction. To view all lots, pictures and descriptions please visit our website! Thank you and happy bidding!

This is a great personal property auction being held in Briarcliff Subdivision in Oak Ridge, TN. There are many furniture pieces, household items, clothing, handbags, shoes, kitchen items, and so much more. Visit Jdsauctions.com to view all pictures...

Join us in this once in a lifetime auction for Knoxville Center Mall (East Town Mall) closing event! Everything from Commercial Benches, chairs and trash cans to Santa's Sleigh! With 388 lots in this auction there is plenty to choose from! Visit Kno...

The McConkey Estate of Clinton TN

Join us for a spectacular online auction that will begin to close on Monday, December 16th at 7PM. Clinton, TN - We invite you to take a look at the large assortment of Designer/Vintage furniture and stunning lamps, Antique sewing machines, Napco Mil...

Another spectacular collectibles and antique auction is brought to you! Join us Online Saturday, December 14th at 2PM for pieces from all over the World. Visit our website to view detailed pictures and descriptions of the entire auction! We have sev...

Great auction, family travel abroad and has some great items from all over the world.

This online auction is a sale of an Oak Ridge Resident who has decided to downsize. Some great pieces are up for auction! Get your bids in so you don't lose out!

The Heath Estate of Clinton, TN features over 500 lots presenting showcase antiques/fine collectibles and more that Mr. and Mrs. Heath have been collecting and selling for decades. Major Master Sergeant Heath is a retired Army Veteran. He and his wi...

The Siple Estate of Kingston, TN

The Siple Estate of Kingston, TN has decided to downsize. The home had various pieces of furniture from Indonesian Mahogany China hutch, Pine Gun Cabinet, Sectionals & family room couches, Archery, riding lawn mowers, power tools and that is just to ...

The Webber Estate of Clinton TN

Mr. Ron Webber of Clinton TN brings some excellent tools, and garage items to you by way of public auction. Mr. & Mrs. Webber have decided to downsize and are moving out of state. Do not miss this one!

Join us for an afternoon auction that has tools, collectibles, furniture and glass pieces you will have to see for yourself.

Join us for a Jewelry and Coin auction that will have you amazed.

Auction is now open for bidding. Please join us for a timeless afternoon auction that collectors & antique enthusiast will not want to miss. Check it out!

The BH Estate of Knoxville TN

Join us for an online auction with a large selection of Furniture, Home goods, Decorations for all holidays, power tools and gardening tools. This immaculate Auction in East Knoxville has Collectibles, Commercial refrigerators and supplies, Ladies Cl...

Knoxville, TN- Join JD’s Auctions online as they bring to you Miss Burchett’s estate of Knoxville, TN. Over 700 luxury items all being sold online.

The Shipe Estate of Knoxville, TN

A native of Anderson County, was well known for his woodworking skills and fine craftsmanship. After retiring from the airline industry as a mechanic he started woodworking full time. Building fine furniture, cabinets and best known for his Grandfath...

Join us for a great afternoon Coin & Jewelry auction!

This estate has just about everything. From Crystal pieces, furniture, tools, gardening supplies, collectibles, handmade quilts and more!

The Silver Leaf Investment Company has decided to retire and begin to liquidate their inventory. We expect 300+ lots in this auction, and many more to come. Don't miss out on this rare auction.

The Browder Estate of Knoxville TN

This Online Auction will have a little something for every taste around. From furniture, tools, sterling silver jewelry, quilts and more! We look forward to seeing you! JD's Auctions Team

An online auction that any coin and jewelry collector will be delighted to view. Join us! JD's Auctions Team

Afternoon Online Auction you wont want to miss! Call our office if you have any questions, we look forward to speaking with you! JD's Auctions Team

This is a down sizing moving event. The D Estate has regal decor and furnishings throughout including a selection of both primitive and antique pieces, children's toys & necessities, tools, fishing accessories and so much more in between! Don't mi...

An evening online auction for all the outdoor Men and Women. Knives, hunting knives & accessories, scrap metal from returned merchandise, gun accessories, kitchen gadgets, apparel, decor and so much more you will just have to look! Join us online for...

This company has posted a total of 170 estate sales. Only the most recent 50 sales are shown.