Here at EstateSales.org, we’ve been noticing some pretty creepy dolls at estate sales. Why are dolls so creepy? Well, lots of reasons. And whether you agree or not, you’ll probably find at least of a few of these dolls creepy enough to keep you up at night. Just for fun, we thought we’d share a few of the creepiest creepy dolls we’ve found at estate sales.

Still having nightmares about Chucky from Child’s Play twenty-something years later? There’s a reason for that. Pediophobia is the fear of dolls, and it’s an actual mental condition. It can be attributed to a triggering event, or as Freud always theorized: some sort of trauma in childhood. Is this fear common? Definitely. Irrational? Maybe. Luckily, like most phobias it can be treated with a healthy dose of immersion therapy — so keep on scrolling!

Ever wonder why dolls that seem to actually be staring at you are more than just a little bit creepy? There’s a scientific term for that and it’s called the “uncanny valley,” defined by Masahiro Mori as “the unsettling place where creepy dolls, like their robot cousins, and before them automatons reside.” What this idea explores is that at some point, dolls begin to look a little too human, and as humans, this makes us, well, a little too uncomfortable. While creepiness is certainly subjective, there seems to be some unspoken, decided-upon place where the differences between doll and human start to really stand out — thus upping the creep factor.

One theory why dolls are so creepy is the idea of the tabula rasa, or the blank slate. Since dolls were historically faceless, it was thought they could help children, who could use them to project whatever emotions, aspirations, or fears their society’s culture projected onto them, thus helping them better understand the world. What didn’t help children was the fact that a nameless, faceless doll can be unsettling — especially in the dark.

Barbie should be included on any list of creepy dolls because let’s face it. There’s definitely something creepy about a beauty icon whose measurements would be 6 feet tall with a 39″ bust, 18″ waist, and 33″ hips if she were human. Barbara Millicent Roberts also has a scary love life. She and her main squeeze (but don’t squeeze too hard or his head might pop off) Ken broke up back in 2004, proving that he shoulda putta ring on it. Barbie moved on, and left him for Blaine, an Australian surfer. But as fate would have it, she and Ken reunited in 2011 and even made it Facebook official. True love — or scary breakup waiting to happen?

Reborns, or Dolls That Are Real but Aren’t Really

Comforting to some but creepy to a lot more, “reborns” or “memory dolls” are lifelike dolls that help people cope with the anxiety of loss. These dolls are extremely lifelike and can cost up to $4,000. In fact, some “reborn” dolls even have fake heartbeats and assimilated breathing to add to the illusion of being real. It’s this extreme realistic-ness that make some of these dolls more than just a little creepy.

Die-hard doll defenders blame Hollywood for the bad reputation dolls have for being creepy, rather than cute, especially around Halloween time. (See: this article). And it’s true — there are plenty of scary doll movies for the idea to creep into the collective consciousness. While Chucky is probably the most well-known cinematic horror, let’s not forget the demonic dolls from the Saw and Puppet Master movies. Other horrifying doll movies to watch out for include Dolls, Magic, May, and Dead Silence.

Proclaimed by demonologists to be haunted, Annabelle the Doll lives behind a glass case inside The Warren’s Occult Museum in Monroe, Connecticut. Annabelle is a vintage Raggedy Ann doll from 1970. When contacted by a medium, the doll was said to be inhabited by the spirit of a 7 year old girl. Annabelle is responsible for several hauntings, including hauntings and a few deaths. Even visitors who taunted the doll at the Warren’s Occult Museum have reported being involved in accidents or even death (!) after their contact with the creepy doll.

Doll collecting is thought of to be one of the world’s creepiest hobbies. But as with any undertaking, creepiness is in the eye of the beholder. If you do decide to dabble in dolls, keep a few things in mind. Just because the doll is old doesn’t mean it’s valuable (remember the Madame Alexander doll craze in the 80s? They’re worth less than retail now). And if people give you the side-eye when they see your collection, go ahead and give them the boot because there are many organizations for people like yourself who also think their dolls (and then some) are worth holding on to.

Contrary to popular belief, thanks to campy movies like The Craft, voodoo dolls are not an actual thing. The confusion comes from the fact that they resemble the dolls used in the ancient mystical religion in Haiti Vodou. But, really, those dolls weren’t used to cast spells either. So those images you have of a voodoo queen tearing off a doll’s limb in order to exact revenge are mistaken. Instead, vodou dolls were left to communicate messages to the dead — which actually might be even creepier.

And it all comes back to Child’s Play. Once owned by Key West legend Robert Eugene Otto, legend has it that this demonic doll served as the inspiration for Chucky in the famous horror movie series. With a head of actual human hair (well, that’s up for debate) and an old sailor costume to look like his owner, Robert the Doll is well known around Key West for its diabolical behavior and can be seen at the East Martello Museum — if you dare.

Estate sales, of course, are the best places to find the creepiest dolls, whether you’re looking to start a collection, add to your own, or just enjoy picking around for treasures and finding the strange (and creepy) things in the world. Happy hunting! 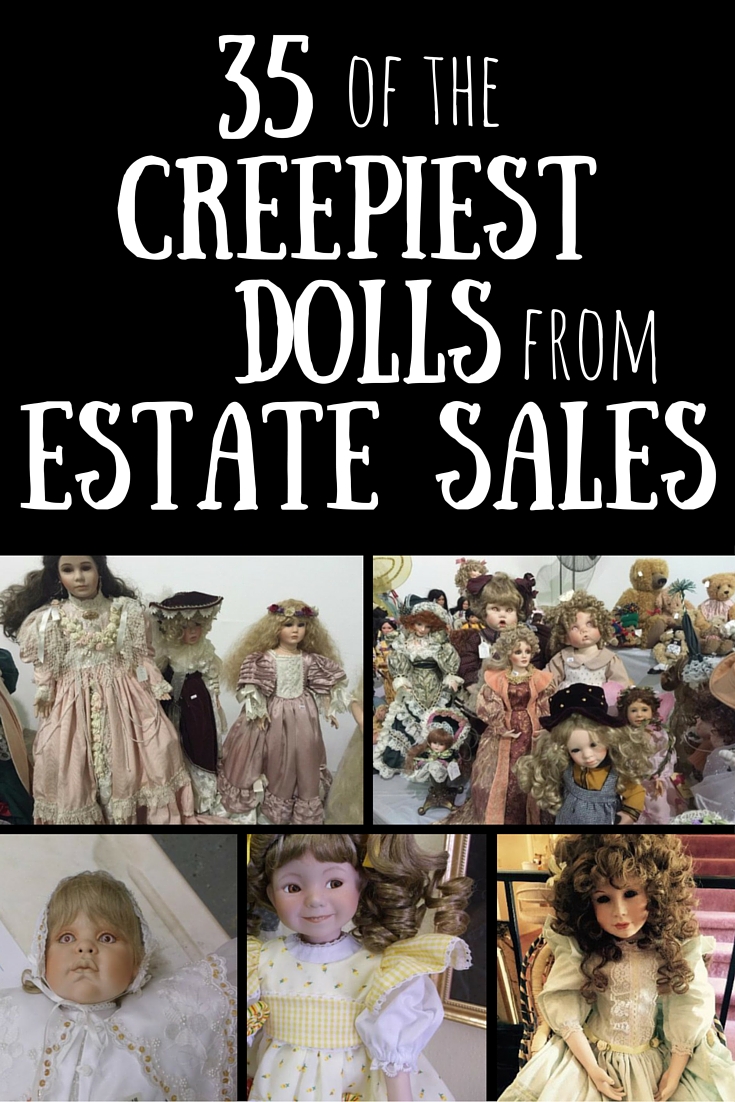 Have you come across any creepy dolls at estate sales? Show us your photos in the comments!