Crystal stemware was a classic wedding gift for many decades and this tradition still stands when it comes to the best, timeless brands of crystal. Waterford crystal is one of those brands.

Whether you’re seeking a replacement for your wedding crystal collection, or simply like the vintage look of crystal items in your home and on your dining table, Waterford crystal can make a wonderful addition to your antique collection. Waterford crystal is often an item people sell at estate sales and many sellers have no idea what their Waterford is worth. If you are looking to sell your Waterford, or purchase some at your next estate sale, read on to learn all about this long-standing tradition in crystal glassware.

Wait a second. Let’s back it up a little and start with this question:

Crystal is a type of glass, specifically glass made with lead. Most crystals have a combination of silica, soda and lead-oxide. Lead crystal is very strong and often used in wine glasses and decorative ornaments.

In the 90s, there was a health scare as the Food and Drug Administration issued a warning about consuming your food out of lead crystal. Even the Waterford website discourages customers from storing liquids and foods in the crystal, which would give the lead more time to leach from the crystal into the food. Ultimately, the answer is no-lead crystal is no more of a risk to your health than your average diet. The Environmental Protection Agency says it is safe for drinking water to carry 15 micrograms of lead per liter, which is far more than one will consume from drinking wine out of a crystal glass for a few hours. That said, those beautiful Waterford wine decanters are for show-not for actual storage.

The standards for classifying a glass as “crystal” vary across the world. In the US, any glass with a lead monoxide content of one percent or more qualifies as crystal, while in Europe, crystal has to have between 10 and 30 percent of lead monoxide. The increased lead content means that crystal takes longer to cool off than glass, which allows glassblowers more time to carve the intricate patterns often seen on crystal items.

The lead content of crystal changes many of its qualities. When compared to traditional glass, it is often thinner, more clear, and heavier. The higher lead content also causes crystal to refract light in a different way than glass, which creates that well-loved sparkle. Crystal even sounds different: when you clink together two crystal glasses, you’ll hear a high-pitched, tinny sound, much different from the deep thud one hears when glasses (like beer mugs) are clinked.

Now that we have that settled, let’s revisit our original question:

The History of Waterford

The original Waterford company was first opened in 1783 by William and George Penrose. The brothers, neither of whom had a background in glass production, produced fine flint glass, a very popular decorative glass in England at the time. England also had a very high import tax for glass at the time—a tax that didn’t apply to Ireland. So, by meeting England’s large demand for this decorative glass and also escaping the import taxes, there was a lot of money to be made. The Penrose brothers were opportunist businessmen..

After 70 years of building a reputation for the finest and clearest glass, including a nod from King George III who had his vacation home outfitted with Waterford crystal, the original Waterford factory was closed in 1853 because of lack of funds.

The Waterford style was picked up again in Ireland in 1947 by two Czech immigrants: Kael Bacik and Miroslav Havel. Havel studied products of the original Waterford company that were on display in the National Museum of Ireland. From the cutting designs created by the original Waterford brothers, Havel created Lismore, a crystal pattern that would eventually be regarded as the best-selling and finest crystal pattern worldwide.

Waterford has a long history as a company and, as a result, a long list of different crystal items that the company has produced. This includes glassware like wine glasses, goblets and champagne flutes, tableware like bowls, plates and trays, lighting fixtures like chandeliers and home decor like ornaments, clocks and frames.

Not only does the company create a variety of different vessels and decorations, but each item is often carved in multiple patterns. Currently, there are 100 patterns in production in addition to several that have been archived. The Waterford crystal world is large, to say the least, but here are some of the company’s most popular patterns.

It’s said that Havel’s inspiration for the crystal pattern was found on a castle in the Irish town of Lismore. The ancient structure is balanced precariously atop a cliff beside a river. The wedges and diamonds in the Lismore pattern echo the towers and windows of the castle.

Waterford updated its most popular pattern in 2012. The pattern’s name—Lismore Diamond—is a nod to the 60-year history of the original Lismore pattern, which was celebrating its “Diamond Jubilee” in the year 2012. A series of ring and upright cuts result in a diamond pattern etched on the glass.

Another of Waterford’s most popular patterns is the Colleen. A combination of oval and diamond cuts, the Colleen is a very advanced and intricate design and often one of the last to be mastered by Waterford crystal glass workers. Colleen is not only a woman’s name, but also translates to “young lass” in Gaelic, a reference to the beauty of both person and crystal.

Perhaps one of Waterford’s most timeless and iconic cuts, Waterford’s Seahorse pattern echoes the curves of the sea creature’s tail and the ridges along its back. A dynamic and embellished cut, the Seahorse pattern is an homage to the Waterford city crest, which features a seahorse. A seahorse is also the symbol for the Waterford crystal company and for many years, Waterford crystal was identified by the green-and-gold seahorse sticker that adorned its products. This sticker still appears on some modern items, but it was the primary method of marking Waterford before 1950, when the stickers were largely replaced by the “Waterford” etch mark.

Like the Colleen pattern, the Alana pattern is also named after a Gaelic term of endearment. This sleek, simple pattern features a clear diamond pattern achieved with a criss-cross cutting. The original Alana pattern was first introduced by the company in 1952 and has since been discontinued.

The Alana Essence, a similar pattern meant to appear more modern than the original Alana, was introduced in 2009.

A Gaelic term meaning “dream of beauty,” Ashling is a common girl’s name in Ireland like many of the other Waterford crystal designs. Ashling was first produced in 1968. 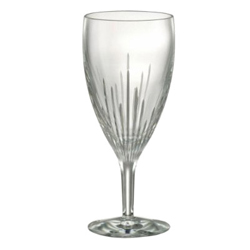 The Aurora pattern is identified by the long, slender cuts that run vertically on often-oversized stemware. The glasses and goblets in this design are generally very large and have a long, pulled stem. The Waterford Company began production of this pattern in 2004 and discontinued it in 2012, so it can only be found through replacement companies now.

The Leana pattern is a series of overlapping bursts cut in to the crystal that make for a very dynamic and sparkling piece of crystal. A later pattern, the Leana was introduced in 1995 and has since been discontinued.

How to Identify Waterford Crystal

“Every piece of Waterford crystal will say ‘Waterford,’” says Michelle Nestel, owner of Irish Crystal Company. “The marking is in a brocade etching on the bottom of the piece or between the cuttings of the bottom or the side. You have to find that stamp to know.”

Alas, it is possible that an item without a marking could potentially be a true Waterford. In some of the oldest Waterford glassware from the Penrose brothers era, the marking has worn away. More modern Waterford items (post 1990) include the name Waterford and a seahorse design etched into the crystal. But there are some additional things to look for when trying to assure yourself that an item is Waterford. For one, a seam is a bad sign, says Nestel.

“A seam in the crystal means it is a machine-made piece and hasn’t been hand blown,” she says.

But, as with many antiques and craft items, Nestel advises shoppers not to buy something just because of the brand name.

“I’m big on buying it because you like it,” she says. “Don’t buy it because it’s Waterford.”

That said, Waterford is often well-liked because of the company’s history of high quality products. If you are looking for a true Waterford item, use the above identification tips when you go shopping at the next estate sale near you.

Thank you to the following individuals and businesses who shared their images of Waterford crystal for this blog post:

Tags: collectibles, crystal, home decor, waterford
Previous Everything You Need for the Vintage Kitchen of Your Dreams
Next Vintage Purse Trends Throughout the Ages